“Nowadays, people may have various kinds of HDMI sources in their home or office, like set-top box, DVD, laptop, etc. When they need to wirelessly extend these sources to the far-end display devices, HDW200 will be a perfect solution. This wireless kit is easy to install, compact and portable. You can almost place them anywhere you want,” commented Mandy Xiong, CEO at AV Access. 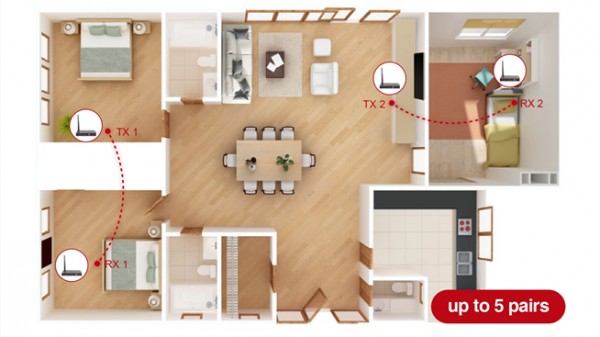 Users can deploy up to 5 independent pairs of HDW200 transmitter and receiver in the same zone without interference. Thus, they can build a complete and robust wireless HDMI system. “The pairing method is quite simple. Just toggle the DIP switches on one transmitter and on one receiver to the same positions, then the transmitter and the receiver will get paired automatically,” added Mandy.

HDW200 HDMI extender kit can transmit 1080P full HD HDMI signal wirelessly up to 200m/656ft in an open field. Even if there is an interior drywall or other obstructions between the transmitter and the receiver, the signal can still transmit 10m-50m(32ft-165ft), stable and reliable. In terms of transmission delay, this wireless kit can transmit lossless signals and may have a transmission latency of 0.1-0.2 seconds, which depends on the signal quality. It is great for TV programs, movies and video presentations. Also, the transmitter is designed with an HDMI local output for easy preview. For signals from this local output, there is no delay at all. What’s more, the included IR signal emitter and receiver allow users to control source device even at the receiver side.

“In addition to HDW200 and HDW100 wireless HDMI extender kits, we are developing new wireless extension solutions to achieve one-to-many applications. Users can wirelessly distribute one HDMI source to more than one display devices at the same time,” concluded Mandy.

Shane Jiang brings more than four years' working experience in content marketing. His extensive knowledge in multilingual writing and translation has brought a balanced perspective to the AV Access team.